In the first section we are switching roles as parts of the machinery of late capitalism: excavator operator stripping naked ourselves and Mother Nature, television studio and television viewers, and audio-guide learners. In the second section we come to know that our illness of solastalgia, or the lived experience of negative environmental change, cannot be diagnosed then treated by the biomedical sciences of medicine or psychiatry, and the distinctive forms of grief and mourning that are emerging as part of the Anthropocene are only beginning to be captured. In the final section we grapple with a proposed journey towards the Symbiocene that involves re-finding the commons.

This video installation draws from the work of environmental philosopher Glenn Albrecht, who provided me with his unpublished psychoterratic typology, which covers some of our positive and negative emotional and psychological responses to global warming and development. Within the typology, Glenn has situated the concept of solastalgia, or the lived experience of negative environmental change, alongside other ideas that attempt to capture the distinctive forms of grief and mourning that are emerging in an era in our history that is now being called the Anthropocene. In exploring these new forms of grieving and mourning, Glenn challenges the foundations of the Anthropocene by offering a new conceptual foundation for thinking about our relationships with other beings and the life support systems of the Earth.

In an Italian language lesson audio-guide, the viewer is taken on a scripted language lesson in three parts beginning with food ordering phrases that accumulate endlessly, celebrating the gratuitousness cultural hegemony provides to some. This is set against television studio coverage of a man on a mining excavator using the machine’s pincers to strip a stuntwoman’s clothing piece by piece, to the delights of an Italian-speaking crowd seated in an amphitheatre similar in form to those built for gladiator combats, venations and executions. The image with voice-over shows the luxury of the one per cent in contrast to some of those in the ninety-nine who are performing exploitative, dangerous and meaningless labour. The stunt being performed also presents a pimped-up version of Mother Nature being conquered, where the strip for the television audience is further sexualised through shooting and editing conventions associated with pornography. A more complex reading is that we are all switching between the roles of excavator operator, stuntwoman, television studio audience, television audience and audio-guide learner in the decisions we make for the situations we find ourselves in every day, if we are privileged enough to have options to navigate them. The audio-guide vocabulary is then co-opted with words that show the dominant faulty conceptual frameworks that enable destructive Anthropocenic activity to continue. 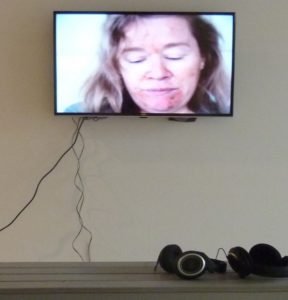 The second section expands our understanding of the experience of the new mourning that is part of solastalgia, which as Glenn points out is an illness that cannot be diagnosed then treated by the biomedical sciences of medicine or psychiatry, possibly like my blistering face from skin-cancer chemotherapy shown as a slow motion non-eventful but emotion filled moment, standing in for all of us being impacted including our buckling drying planet.

Glenn’s new conceptual framework provides ideas that may assist us with moving into the Symbiocene. Footage taken in 2007 throughout tunnels made for people to enter a psychiatric institution from harbour boats, which is now a precinct for the soon to be dismantled Sydney College for the Arts, points to a type of searching required for this process and forms the third part of this work. Questions are asked that seek people whose roles and personal ethics can help, including Byzantine Emperor Justinian the Great (482 – 565) who legislated for the commons. The distinctions of the Code of Justinian help us 1,500 years later by giving a name to the aspirations of many around the world towards recommoning initiatives. Hugo Mattei is also asked about, because he was instrumental in recently recommoning the Naples Water Corporation that now operates on environmental and commons-based principles rather than being solely profit-driven.

People like Glenn and Arthur Dent are writing guides to help us tourists connect with and navigate new terrain. The stakes are high in the case of Glenn’s work because a new mindset is needed to integrate his ideas so that practical solutions can be devised and implemented, if there is to be a capable future. We need to find new pathways, whilst as Glenn outlines, we continue to mourn our own culpability and stupidity, as well as natural mortality. This must occur whilst we are being smuggled through tunnels by night into psychiatric institutions or hitching a ride on some part of the machinery of capitalism, which is simultaneously stripping us all naked and extending our inertia even further.

Sound collaborators – The Tipping Point by De-Franco featuring the spoken word of Glenn Albrecht, from the album Solastalgia; and Raffaella Washington. 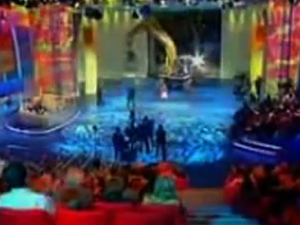