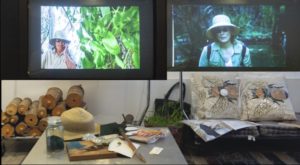 Maladaptation points to the way that stereotypes and hyppereal plotlines are being extended into our everyday lives to frame active citizenship as criminality, as part of making anyone vulnerable to removal or extradition without a blink of the public eye. The work does this by presenting community advocate Bev Smiles as the Meryl Streep character in Kaufman’s film Adaptation. Bev recently won her case against the NSW Police and the Peabody-owned Wilpinjong Coal Mine that tested the new state anti-protest legislation.

Nicholas Cage plays the central screenwriter character in Adaptation and succumbs to writing a formulaic blockbuster ending to his film that sells out on Streep’s character. She spirals down into a drug-and-sex-crazed out-of-control criminal and Bev spills into her hysterical state too. However, unlike Streep, Bev is not led from a detached existential crisis, but from her first hand experience of fracking, logging, mining and damming as business-as-usual in our national parks.

Bev also gets caught in roles of the film’s other two main characters where the Kaufman plotline of the thief collecting orchids for his own obsession is replaced with her collecting seeds to protect species. Like Cage, the screenwriter who gets entangled in the relationships of his work’s characters, Bev hides out in the national park from the thief and the authorities, retracing the history of Australian heroes and activists-on-the-run who have had to choose this way of life to survive.

The gallery installation includes items related to a botanist-directed journey I undertook to a plant 600 kilometres away in a national park that produces the best quality manuka honey in mainland Australia. The botanist recently won tenders to collect NSW and SA seeds for the London Seed Bank, and the seedlings he propagated from my collected seeds have been planted. These seeds will be distributed within seedsaving and native bee networks. Similar to Bev’s efforts against coalmining, this aspect of the work explores the breaking of rules as citizen science to provide assistance for the maintenance and expansion of the commons and to protect biodiversity.