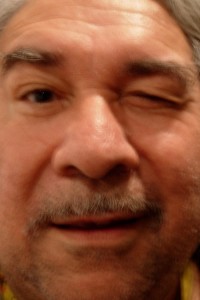 Indigenous Australians are clearly one of the most disenfranchised groups of people in the world. In my work Wink, I explore the criticality many Indigenous people possess to interrogate and sum up a range of interlocking social games operating in any given situation, as indicated through their use of the wink. Often accompanied by a short joke, this action ruptures the hold of the habitus whilst also playing in the terrain of what Bourdieu describes as the open secret, as shown in this example.

In 2009 the New South Wales Government completed an inquiry about opening up the parklands they manage for cultural tourism and the Sydney Morning Herald newspaper announced that a possible outcome could be an Indigenous arts festival on Cockatoo Island. Indigenous curator Djon Mundine was quoted in the article and there may have even been the suggestion that he direct the festival. In a conversation with Mundine at the time, he said that if it played out it would more than likely be him standing alone on a hill on the island, winking at everyone walking past.

Mundine maintains an open secret by not breaking the taboo of explicitly stating the common knowledge that everyone knows that everyone knows, and weaves an extension of the secret into his story of the proposed collusion by involving the potential festivalgoers. In both accounts he is referring to opportunistic government announcements that tout responsible governance in the interests of delivering outcomes for the community, but are typically empty and in this case would be a rebranded umbrella arts spectacle event on an island that they need to find alternate uses for, where little new program content would be provided that would be in keeping with further diminishing strategic support for genuine arts development, especially within the Indigenous sector. At a landscape level this is further exploitation of the Indigenous community where adequate policy redress of their needs and concerns harking back to the original invasion will always be smokescreened in tokenistic acts for money grabbing tourism dollars.

Knowledge diffuses the hold of the habitus and Mundine’s witty story indicates he possesses the appropriate type and amount of knowledge to step in and out of social games, which provides him with the capacity to check his participation and exert influence on the power structures of the various fields via the social games that they support.

Later that year I made Wink, which comprises individual photograph portraits of Mundine and other Indigenous people winking. Without Mundine’s festival story, their gaze and wink can be read as a collective acknowledgement in another open secret that includes references to the first white invasion, my role as photographer standing in for the anthropologist’s gaze and the possible stealing of spirit through photography. Australian curator and writer Ann Finegan takes this idea further as a viewer of the photographs in a positive direction by seeing Indigenous Australia standing strong, and winking from their own ground. “In accepting the wink, as being directed at me, there’s a kind of implicit acceptance by me of the other, and of the other’s acceptance of me. Like Perkins’ Bran Nue Dae it’s a healing and sustaining fantasy. Zizek, as a Lacanian theorist of politics, might read it as a fantasy of national healing [where] Brown’s reconciliation gesture resonates with Bindi Cole’s I Forgive You, recently spelled out in large emu feathers on the walls of Brisbane’s GOMA.”  Jenny Brown’s Wink Kandos Projects, 2012.