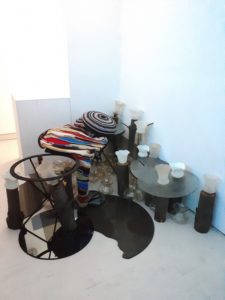 1. Slow hope: becoming coronavirus (2020) sees me protected by a helmet and hidden in a reflected and projected image within the makeshift debris and detritus structures.  I slurp at an image of myself, attempting to become whole again by drinking myself. This is in reference to Narcissus the Greek god that fell in love with his own image without recognising it, my action coming after Patty Chang’s Fountain (1999).

2. Always Mind the Bullocks (2016) explores the accepted reading of the last painting Baroness Elsa von Freytag-Loringhoven painted in 1924, Forgotten Like this Parapluice am I by You – Faithless Bernice! Rather than being a self-pitying victim, Elsa is leaving the art field frame whilst pointing out specific structural forces that were preventing her from building a career and celebrating her major achievements. 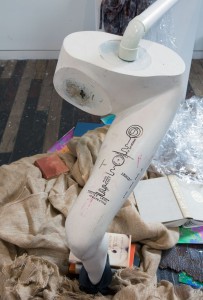 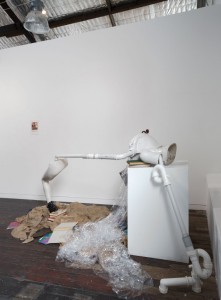 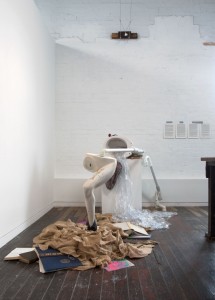 3. Halley’s sky news: world alienation, legal personhood & the environment (2018) and the following tapestry mostly comprise part-completed panels sourced from disability services. This work traces the alienating effects of capitalism that begins with Indigenous connection in a quote by academic Mary Graham: ‘I am located therefore I am.’ Successive panels track this increasing alienation through core world events that includes and extends Hannah Arendt’s discussion on this theme. The tapestry is further connected to corresponding laws and actions that have determined relationships with the environment, both protective and destructive. Text strip detail here. 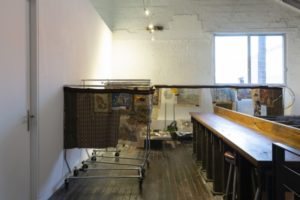 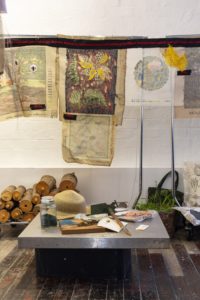 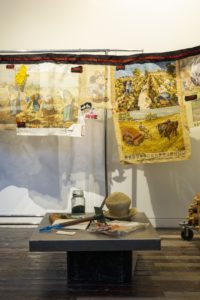 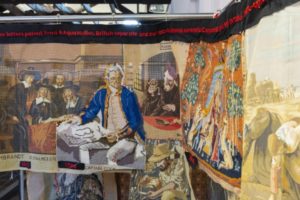 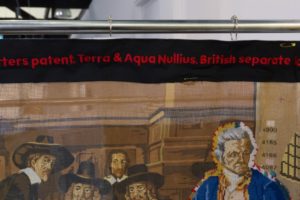 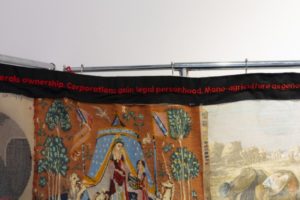 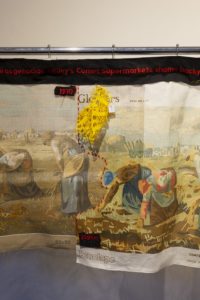 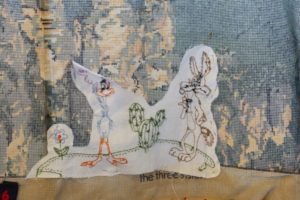 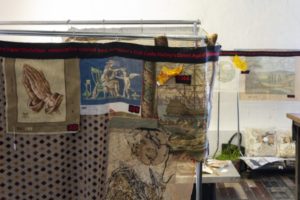 4. Halley’s sky news: advertising, economics & psychology (2015) presents and extends specific influences that Bernays created on behalf of governments and corporations presented by Adam Curtis in the BBC series The Century of the Self. Bernays invented public relations in America by applying his Uncle Sigmund Freud’s ideas for mass control. Text strip detail here. 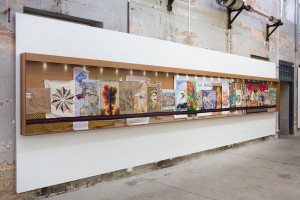 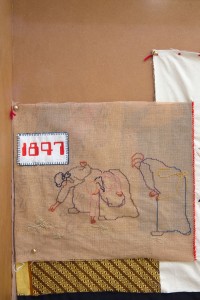 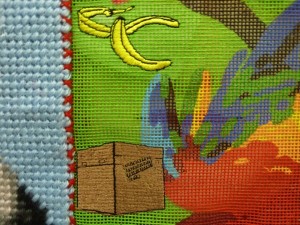 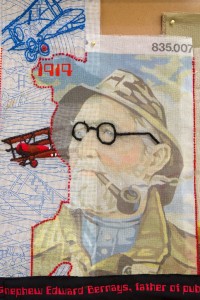 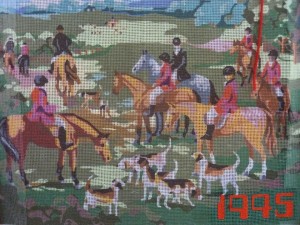 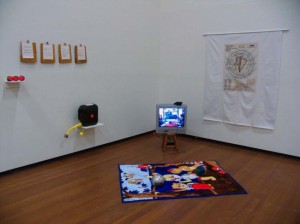 for capitalists (2009) illustrates some of the difficulty in the first step of distinguishing the relationship between the economic field and the market, the ways and extent of their influences on the political field, as well as the various incursions by all three into our everyday experiences. To make this point through exaggeration, the work takes the concept of play, because it is an instrument for transformation as well as a source of pleasure, where the work’s “nursery toys” assist with a mastery that speaks of a continuum of capitalistic engagements lasting long into adulthood. The turtle and hare story floormat with rubber Earth and silver balls sits below a chart on the wall depicting the astronomical birth chart of the New York Stock Exchange.

6. Many Happy Returns (2013) takes its name from an episode of the 1967 cult British television series The Prisoner. BE SEEING YOU was made with sociologist Dr Sacha Kagan, who provides systems thinking and ‘sustainability science’ methodologies to map the complex Village situation in an attempt to assist The Prisoner to escape. Each of the 25 plates from the Global North are taken up as possible end points to the collaborative work. They are painted to include the Village’s monitoring and security force, a balloon-like device called Rover. Each includes a short text to provide a local example of how a past or present administration and other entities have exerted power either positively or negatively on the collective commons, as well as examples of related citizen actions. All references from wikipedia unless otherwise stated.

Spain: The history of the anarchist collective in Spain reveals that the experiments in workers’ self-management (syndicalism), both urban and rural, involved over 300 interdependent bartering systems operating that lasted 18 months, in 1936-37, until their ‘allies’ the socialists and Stalinists came with armed forces and repressed it and installed a dictatorship. The Anarchist Collectives: Workers’ Self-management in the Spanish Revolution 1936-1939, Sam Dolgoff 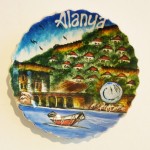 Turkey: In the early 1970s, when fish stocks ran low in Alanya, a system of rotating access was developed to preserve this sector. This innovative system was part of Elinor Ostrom’s research on economic governance that led to her 2009 Nobel Prize in Economics. Her work demonstrated how common resources such as forests, fisheries, oil fields or grazing lands can be managed successfully by the people who use them rather than by governments or private companies. 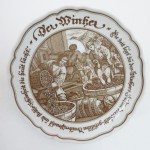 Corporations: What if the new capitalism produced a new kind of feudalism? Indeed, as products are increasingly replaced by immaterial experiences, and are licensed rather than sold, then this means that consumers will no longer ‘own’ anything, merely a right to use it, and that those without means will be excluded from access to these networks. Jeremy Rifkin – The Age of Access: The New Culture of Hypercapitalism, Where all of Life is a Paid-For Experience

Estonia: On 1 January 2013, Tallinn became the largest European city and the first European capital to provide free public transport to its residents. The initial results of the move are encouraging: the use of public transport in Tallinn has already increased by 10% while traffic in city centre has reduced by 15%.

France: As part of the Occupy Movement some 300 protesters started occupying Paris’s financial district, La Défense, on 4 November 2011.  On 11 November, following a call made on social networks, some 400 additional people joined the occupation. Occupy protests have also begun at Nantes, Lyon, Grenoble, Marseille, Perpignan and more than 50 cities.

Italy: Rita Atria (Partanna, September 4, 1974 – Rome, July 26, 1992) was a witness in a major Mafia investigation in Sicily, breaking the Omertà – code of silence. She committed suicide in July 1992, a week after the Mafia killed the prosecutor Paolo Borsellino, with whom she had been working.

Germany: Silke Helfrich, based in Jena near Wuppertal, headed the Regional office of the Heinrich Böll Foundation for Central America, Mexico and the Caribbean from 1999 to 2007, focusing on globalization, gender and human rights. Helfrich has developed an international reputation for her commons advocacy through her German-speaking Commonsblog (http://www.commonsblog.de).

United Kingdom: Margaret Thatcher was the longest-serving (1979–1990) Prime Minister of the United Kingdom of the 20th century,  who introduced cash limits on public spending, reduced expenditure on social services such as education and housing, and reduced the power of the trade unions. In July 1992 the tobacco company Philip Morris hired Thatcher as a “geopolitical consultant” for $250,000 per year and with an annual contribution of $250,000 to her foundation. She also earned $50,000 for each speech she delivered. In 1998 Thatcher called for the release of former Chilean dictator Augusto Pinochet when Spain had him arrested and sought to try him for human rights violations, citing the help he gave Britain during the Falklands War. In 1999, she visited him while he was under house arrest near London. Pinochet was released in March 2000 on medical grounds by the Home Secretary Jack Straw without facing trial.

USA – Florida: On June 7, 1977, Anita Bryant’s campaign led to a repeal of the anti-discrimination ordinance by a margin of 69 to 31 percent. However, the success of Bryant’s campaign galvanised her opponents and the gay community retaliated against her by organising a boycott of orange juice. Gay bars all over North America took screwdrivers off their drink menus and replaced them with the “Anita Bryant”, which was made with vodka and apple juice. Sales and proceeds went to gay civil rights activists to help fund their fight against Bryant and her campaign. Bryant’s contract with the Florida Citrus Commission was allowed to lapse in 1979 because of the controversy and the negative publicity generated by her political campaigns. 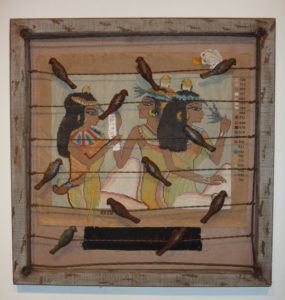 7. Birds watch New Kingdom nobles pass Self-Service Wells Act at the Nile Basin Authority (2019) was made to auction as part of a fundraiser for the corroboree YAAMA NGUNNA BAAKA co-created by Jenny Brown and held along the lower Baaka (Darling River) in Far Western NSW in September 2019. Itplays with Alfred Hitchcock’s The Birds from 1963, which is possibly the first artwork of the western world that presents a post-anthropocentric viewpoint. The  ‘watergate’ scandal set in ancient times draws from the research of academic Delphine Driaux and points to the mismanagement and corruption involved in the policy impacting the Baaka. Driaux found that the state implemented a relatively equitable water scheme from the Old to New Kingdom (ca. 2543–1077 BC)  where  the local administration, acted directly in terms of controlling the water supply of its inhabitants. From this time, however, the gradual development of wells and technological developments modified the approach to water supply and also the role and the implication of the state in it. By gradually placing a source of water in the towns, close to the inhabitants who were now able to supply themselves directly, the state withdrew slowly from one of its many responsibilities regarding the supply of provisions to the population. 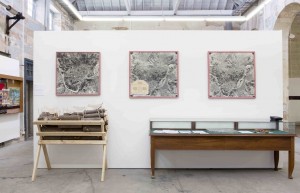 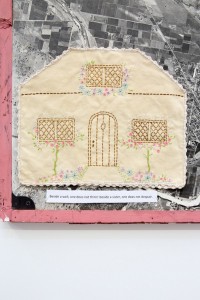 8. Singleton Women’s Script (2001) is a longitudinal representation of the key findings about the secret script language spoken and written by women living in Singleton, New South Wales. Houses in 1867 that produced embroidered script handkerchiefs and doilies are shown in panel one. Panel two shows houses in 1930 known to have produced script written cards and letters. Panel three shows localities in 1953 where girls met to sing rhymes and participate in other script learning activities. As a private linguistic space the secret script enabled these women to share thoughts and swap experiences at a time when most of them were illiterate and often denied identities apart from men. Confined to their home, the women transformed objects of their daily life into tools for greater intellectual independence.