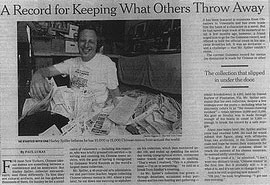 Given globalisation is not about equity, homogenisation or developing networks of interdependence through globalism, as a one-way accelerated street it can be considered as a type of of collecting. My interest in asking Harley Spiller to assist him with his Guinness World Book of Records one-day count of his Chinese take-out menus collection in New York was to use this opportunity to try and perform globalisation. By traveling by across time zones by plane, I was able to collect menus in Sydney and Shanghai as Harley counted, to amplify his activity within the timeframe, dynamically shrinking distance on a large scale and altering the qualities of and relationship between space.

The work playfully links these two traditionally agonistic world dominants, who in the world arena largely determine who gets to take what and how much of whatever in the time left to collect and count. My de facto involvement and the record-counting event can be seen as globalisation’s distortion of Harley’s more modest lifelong search abroad and at home for the perfect dumpling, traceable through the artifacts of his calligraphic collection, which in itself harks back to an earlier flow of market exchange. China was among the first civilisations to possess the pattern of cultural activity involving collecting objects as ‘works of art’ rather than as luxury objects as signs of wealth, prestige or political power. “Developing an art market by the fourth century AD, … the first objects to be classified as ‘works of art’ and to be traded and collected as such were pieces of calligraphy, inscriptions written on paper or silk with ink and brush.”

This work was made as part of an Australia-China Council residency, supported by the National Association for the Visual Arts & NSW Ministry for the Arts in 2005, with works exhibited in a solo show at BAU Gallery, Shanghai.