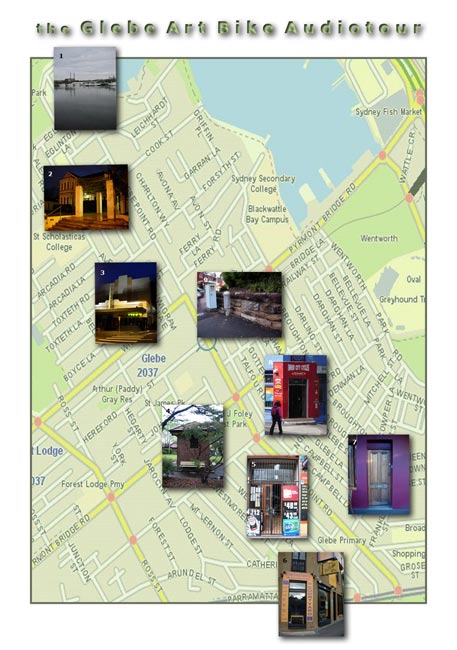 The audiotour is not historical reporting or simple mapping, but an artistic interpretation using the local history as raw material to explore ideas concerning time, causation, activism, change and memory. Interactive elements of the tour will include a false diary in a café for people to stop and read, links to current uses of buildings such as Indigenous authors reading excerpts from their books that have been or will be launched at Gleebooks, a video installation of a re-enactment of a key event in one of the buildings where an event took place, perhaps some false documents could be made as relics for display, and perhaps real relics could be located with assistance from local people and historians for display in the library or one of the key buildings, etc. These will be devised in collaboration with café owners, businesses or government services such as Council’s library and the primary school.

Several key locations on Glebe Point Road that are a great springboard to access the rich stories that have shaped Glebe’s distinctive local character and our national community have already been identified:

1 Blackwattle Bay Studios – former resident artists’ work could be described or included in some way.
2 Glebe Library – could display false or real documentation. Mp3 players with audiotours could be available for loan from the library as well as accessible cd players with audiotours. Accessible cd players will include Braille tape on pause and play buttons to assist people with vision impairment.
3 Valhalla Cinema – local documentary maker Tom Zubrycki’s films screened at this cinema and he has expressed interest in the project. A contrast could be made with the 50s migrant film ‘Mike and Stephanie’ and Tom’s trial by fire experiences depicted in ‘Molly & Mubarak’. This third cinema’s closure on Glebe Point Road could include the shift in distribution and exhibition of film.
4 Foley Park Wireless House – broadcasts from this innovative 1934 public feature could morph with debate around its closure & current transformation into a public art.
5 Unemployed Workers’ Movement – former meeting place that served up to one hundred gallons of soup daily and was very active in anti-eviction and dole riots around 1931. On one occasion an estimated crowd of 5000 people converged on the Town Hall and ripped up over 1000 dole forms. A re-enactment with some of the key characters of this time including Stan Moran could be included. Dramatisations could include blurring the boundaries between ghosts of the past and the current functions of the location that is a bottle shop such as the ‘ghosts’ in the film Truly, Madly, Deeply who could be part of a discussion deciding on “reds” whilst holding a political discussion. A TV surveillance monitor could be used as if depicting part of the room. The bottle shop used to be the meeting place of the Communist Party as well, however, more action came through the UWM.
6 Women’s Liberation Movement first office (1970s) – some of the key campaigns included closing Hay Children’s Prison & founding the first Australian women’s refuge in Westmoreland& St Glebe.
7 CAMP early office (1970s) – campaigns for the rights of gay & lesbian people include the first Mardi Gras in 1978 that led to 53 people being arrested.
8 Glebe Point Road was picketed for 8 months when police escorted scab labour on trams during the Timber workers’ strike of 1929.

Many other sites could be incorporated as further primary / secondary and formal / informal research is undertaken. There can be stories generated through involvement of people in the street. For example, children from Glebe Point Road Public School could be invited to participate through a series of workshops, and the many new age shops along Glebe Point Road and the Glebe Markets could provide clairvoyant insights on stories to pursue.

Many people expressed support for the project and have offered assistance with research and realisation include – Max Solling author of a history of Glebe,  Bobbie Burke from the Glebe Society and members of the current Balmain/Port Jackson Communist Party who meet in Glebe Point Road’s Toxteth Hotel. Glebe Point Road dwellers will be invited to be involved including clairvoyants in the markets and shops, school children, shop owners whose buildings are integral to the rich left wing history, etc.

Artwork Damian Castaldi who also offered the idea of a tuk-tuk and helmet with speakers  designed for listening to the tour when bike riding.