Placing stones as they are found explores mining and globalism from the contradictory careful singular action of trying to “undo” the trajectory of a few small decorative Chinese stones. People in Australia and China working in various professions created my journey to many destinations in China that attempted to repatriate the stones to their original site. Gary Sangster writes: 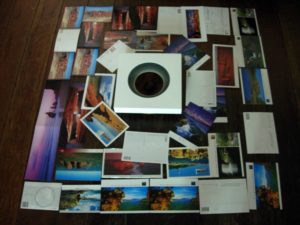 “In early 2005, an elegant gesture of product repatriation was conceived and produced by Jenny Brown as a  way of both describing certain elements of a working global economy and tracing the efficiency of a path of distribution. It was a modest act of economic anthropology that engaged research, performance, and documentation, as well as articulating an imagined or real cultural narrative of a concept of homeland and the actual journey of anonymous artifacts to their site of origin. The somewhat poignant, yet deeply ironic, pursuit of a homecoming, for near valueless materials or objects, small stones, garden decor-purchased inexpensively from a down-market, transnational department store in Sydney-heightens the sense of disconnection and inauthenticity produced through a global economic marketplace. The project…suggests a sense of loss, or alienation, as objects of value, objects of use, objects of function, and objects of desire, large or small, voluble or mute, are interminably transferable, anonymously interchangeable, dislocated and redefined throughout the trade routes of mass-market capital. The work is an action of little consequence, a specific kind of elusive gesture of futility towards irreversible systems and processes, which makes sense only as a poetic or aesthetic form of art.” 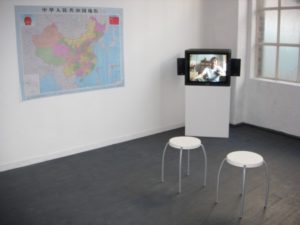 Video documentation of the journey includes interviews with those who have set the search on different paths as well as another cultural narrative involving people from Uluru to the coastline drawing circles on the backs of scenic postcards of local stone, whilst discussing their connection to stone. The gesture draws attention to the flows of power in the globalised field of power that escape the reach of ordinary citizens and how specific efforts of resistance can move from entanglement to greater entanglement without providing political understanding. A more personal dimension of the work involves the way it touches on the connection between stone and bone, and stone and soul; the lost, stolen, repressed and disrupted connections with our ancestral traditions through migration, deportation and imperialism, as well as Indigenous issues around repatriation.

Within the context of the work’s overarching focus on the displacement of stone as part of globalised manufacturing processes, the second moving image shows what to look at to see capitalism’s fundamental flaw. Older men in jeans and t-shirts alongside younger men in traditional Chinese clothes carrying boxes of consumer goods up stairs in an endless stream.

This work was made as part of an Australia­‐China Council residency, supported by National Association for the Visual Arts and NSW Ministry for the Arts in 2005.  Documentation works were exhibited at Casula Powerhouse, Mori Gallery and Loose Projects (Sydney), Gosford Regional Gallery and BAU Gallery, Shanghai 2006.