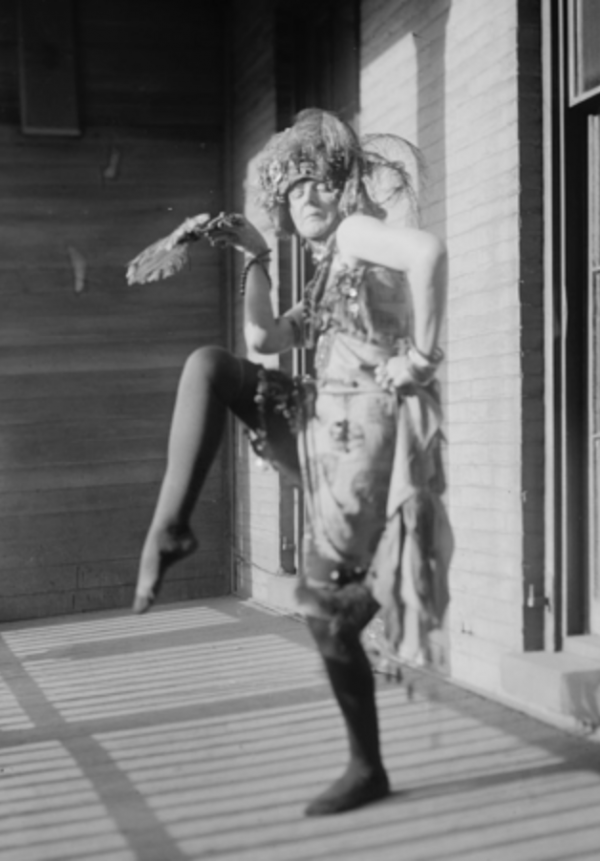 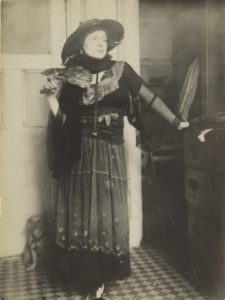 Roses are growing wheels creatively interprets the life and legacy of Baroness Elsa von Freytag Loringhoven who lived from 1874 to 1927 (Henceforth: Elsa). Elsa invented the dérive and found object, and can be considered the Western art field’s first fabulator who promoted institutional change for the common good. Elsa was born Else Hildegarde Plötz in the German town of Swinemünde, now Świnoujście in Poland, and she participated in Munich’s Dionysian movement before migrating to America, afterwards living in Germany and France. This project will raise awareness of the importance of Elsa’s work as part of Western art history whilst drawing in most of the research about her that has been undertaken in the English-speaking world. 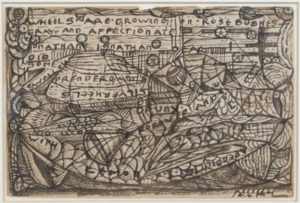 Roses are growing wheels is a working title drawn from her poem ‘Wheels are growing on rose bushes, gray and affectionate’ and is a tribute to her. This work has been developed as part of the 2021 masterclass in film and philosophy at the Filmuniversität Babelsberg KONRAD WOLF under the supervision of Prof. Reeh-Peters. The film university has provided production funding.

Background
Roses are growing wheels draws from over five years of theoretical/historical/creative interpretation about Elsa’s life and legacy. My analysis draws from the work of the main recent scholars of Baroness Elsa: Canadian literary historian Irene Gammel who discusses Elsa’s invention of the found object, the American art historian and critic Amelia Jones who discusses her invention of the dérive, and American curator and art dealer Francis Naumann who specialises in the art of Dada and Surrealism.

Roses are growing wheels comprises three artistic research approaches that  provide elements for an essay style film. Tableau vivants of Elsa performing with recreations of her works/costumes/dérives will be contextualised within current day  nested local protest and promotional actions relating to the anti-capitalistic and progressive agenda narratives Elsa pursued. This work will be discussed using  my thinking about the principles of her practice that are drawn from the revolutinary thinking of political thinker Hannah Arendt. See my 2018 article EXPLORING THE PRINCIPLES OF ALLODOXIC ART (IN DIALOGUE WITH BARONESS ELSA)

Elsa’s works for Roses are growing wheels
The work will present Elsa’s protest actions that show how she perceived war and other societal injustices from an economic perspective. Activity Elsa addressed include the introduction of supermarket commercialisation in America in the 1920s (she wore a hat adorned with fresh vegetables to celebrate home-grown produce to protest this industrial development); American industry with particular attention on Henry Ford and the American desire to cling to Victorian gender roles (she wore a set of working tail lights as a bustle); nationalism as indicated by visa restrictions for the poor, and its hollowing out the true spirit of events (she wore a candlelit cake-hat to the French Embassy in Germany on Bastille Day); and war-mongering and the lack of response to it by the New York art world (her work Urinal submitted to the Society of Independent Artists exhibition in New York in 1917).

The work will also explore the way that Elsa embraced progressive agendas and I will focus on what I believe was support for scientist Nikola Tesla. The pair were fellow migrants living in New York between the two wars who both had their work stolen. Also, Elsa’s possible murder in France in 1924 that has until my research been interpreted as suicide, which is now being investigated by others.

Progress to date
We are recreating Elsa  in costumes and poses inspired by Elsa’s photographs, as well as to set her in scenes with her making her costumes for dérives, and selected sculptures, paintings and poems. For example, I will recreate and film my installation of Elsa’s last painting Forgotten Like this Parapluice am I by You – Faithless Bernice! 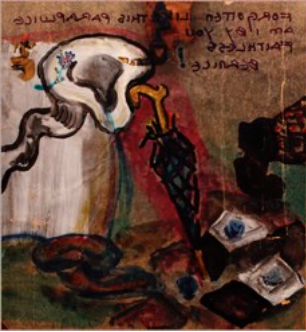 Forgotten Like this Parapluice am I by You – Faithless Bernice! 1924
Elsa is pointing to the structural forces and historical events that were preventing her from building a career. My example installation for filming, exhibited in 2016. 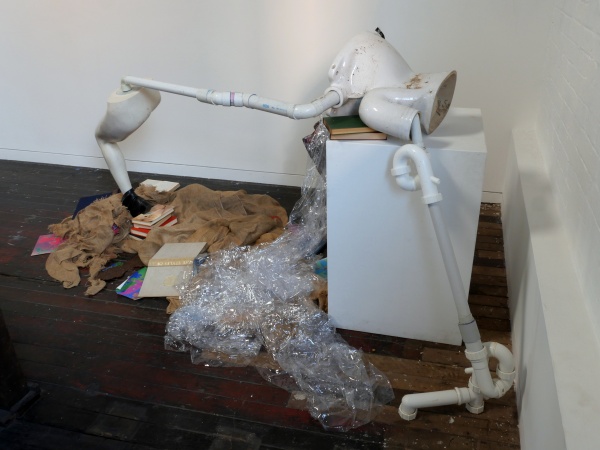 Artworks dealing with the work of Nikola Tesla

Elsa’s work is exemplary in the way that it shows how she refused to allow conventional thinking and hegemonic processes to prevent her from understanding and presenting the work of fellow migrant Serbian-American Nikola Tesla (1856-1943). Elsa produced artistic outcomes to engage with Tesla’s firm beliefs in universal rights to access and participation using green energy, and the dangers of burning fossil fuels to generate electricity. Contemporary artists continue to embrace the still under-implemented ideas of Tesla, Indigenous cultures, and more recent scientists, by providing access points for participants and viewers to develop an understanding of the ways in which hegemony and allodoxia interconnect as conflicted interest, corruption, climate denialism and deliberate poor policy implementation. Most of these impacts point to the diminished and de-valued role of the scientific field in policy-making processes and artists rally against this more specifically and directly by making art that supports and circulates information about best-practice green technology and sustainable innovation – some will be provided.

French painter Francis Picabia (1879 – 1953) illustrated the cover of the periodical Dadaphone in Paris 1920, and it can be interpreted as showing the narrow and patriarchal art establishment views of the time in relation to Elsa’s creative interpretation of Tesla’s invention, Elsa herself and possibly also Tesla’s invention. The translated text of the illustration states: “hands in canonical droppings, the flesh that has drunk too much is a Neapolitan beef, the lady’s drawbridge” with the centre text split within the design stating “refresh his bed”. My version of Elsa’s work Limbswish was filmed with the working Tesla coil at the University of Wollongong in February 2022.

Portrait Elsa (1921), and another ‘Nikola Tesla and an ‘unknown woman’.

Earring and object, 1918 and Wardenclyffe 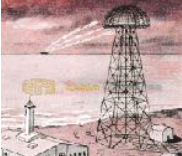 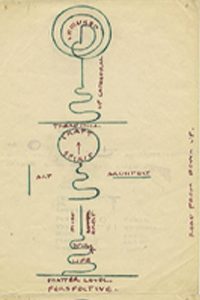 In “Matter Level Perspective,” Elsa uses sketches that resemble an early Cathode X-Ray tube. The poem begins with “matter” from the “Matter Level Perspective” and continues through the coils or “spiral” of “life” and “art” before coming together as “spirit” and “craft,” but then the break down of these essential elements into their particle and electromagnetic state is the result of the poems movement through the “cathedral,” which functions as a play on the word “cathode” and as a comment on the affect of institutions. At the end of the poem, we find the word “immured” trapped and contained in a “circle container” as waves that are still embodied within the circle, but are disembodied from their original “perspective” or form and in danger of being released and therefore disintegrated into the world. (In part from the University of Maryland Digital Library Collection)

Cathedral, 1918
The television series the Tesla Files, puts forward information regarding Tesla’s period in the New Yorker that may connect to Elsa’s consideration of entrapment.  This includes the idea that he lived within this large-scale science project laboratory to progress his scientific endeavours and used pigeons to work around the constraints of the of the government body that later became the CIA. Elsa’s poem Matter Level Perspective uses the word cathedral to capture the notion of institution as well as the New Yorker as shown below in this sculpture. 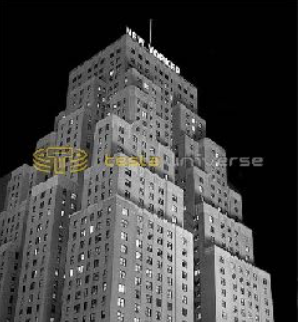 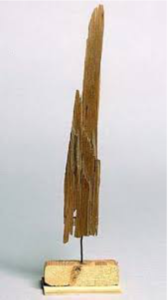 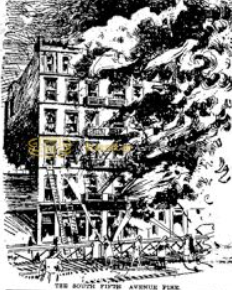