Burnt Stars Focussing on the life and legacy of Hannah Arendt, this work shows the importance she placed on the role of ethics, shared action and remembrance as part of community citizenship. Hamburg activist Annalena Kirchler counters the other positions presented in Joseph Beuys’ fictional Tartar rescue, which is extended to include a crash-landing onto Martin Heidegger’s hut. Kirchler also plays Arendt, mapping her personal experiences in the Gurs prison camp against her theorisation on the importance of poetic thinking for revolutionary action and how remembrance is lost through the dead tradition.

Maladaptation Bev Smiles plays the Meryl Streep character in the Kaufman and Jonze film Adaptation. Bev recently won her case against the NSW Police and the Wilpinjong Coal Mine that tested the new state anti-protest legislation. Unlike Streep, Bev is not led from a detached existential crisis, but from her first hand experience of fracking, logging, mining and damming as business-as-usual in our national parks. Bev as activist-on-the-run hides out in Cage’s role in the national park from the orchid thief and authorities, retracing the survival history of Australian bush heroes. Gallery installation elements include manuka plant seedlings from a 600km botanist-directed journey that produces mainland Australia’s best Manuka honey. 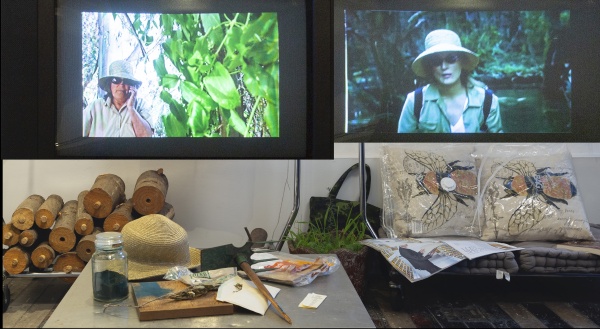 Pick-Up-Needle-Bottom-Of-Sea performs an apology to Iraq as a participant imagining of a water-energy postal system in the creek that cuts across my backyard down through rivers to the sea. The work responds to French-Swiss filmmaker Jean-Luc Godard’s description of how America wanted to take control of the Chaldean writing system, the birth of writing, as its motivation for targeting Iraq, which led to the US-Australian-British-led invasion. The theft of the Gilgamesh tablets during the war and their relocation to Washington’s Museum of Bible entangles this drive further. In our ice-book form’s floating creekline release, the Christian bible melts away.

The hitchhiker’s guide to the Symbiocene This work explores Glenn Albrecht’s unpublished psychoterratic typology that covers responses to global warming and development, and provides a new conceptual foundation for thinking about relationships.

Tied, Mayday 2006 This work includes documentation of a funerary performance on the Tribal Warrior boat at Farm Cove Sydney with members of the Pacific Island Mount Druitt Action Network and other Pacific Islander Australians. Shown on multiple computer screens inside the boat as part of the performance, participants share their understandings and hopes about climate collapse tide rising impacts to their homelands. Animation sequences of the melting ice forms are shown on the second screen.

Solastalgia A multi-screen train-carriage installation and performance that mashes up Fahrenheit 451 with the Irish Potato Genocide, to add an economic crisis to the social and political vacuum Bradbury created. Coalmining-impacted community members performed as books and excerpts from Truffaut’s filmic version were projected through windows and doors.

Following advice provided by experts in Australia and China, Placing stones as they are found explores mining and globalism from the contradictory careful singular action of trying to “undo” the trajectory of a few small decorative Chinese stones. In a related journey from Uluru to the Australian coastline people discuss their connection to stone whilst drawing circles in the sand or on postcards depicting local natural stone features.