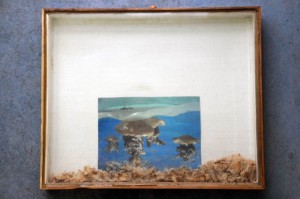 Compounds of a Prism  with David Medalla performing Songs from the Merz Dungeon of Dreams, Another Vacant Space Berlin 2012

This work was made in response to the task to house a work in a vitrine relating to the life and work Kurt Schwitters. The constant movement that Schwitters undertook to navigate the turbulent political times and his private world are presented alongside ideas of his legacy of uniquely created forms that he manifested under the radar of the art world. These works went on to be known as the precursors to many movements and a great influence on individual artists.

Schwitters wrote in 1930 that the experience of war and its aftermath had been critical in the development of his new way of making art:

In the war things were in terrible turmoil. What I had learned at the academy was of no use to me… I took what I found, for we were a poor country … everything was destroyed anyway and new things had to be made from the fragments. 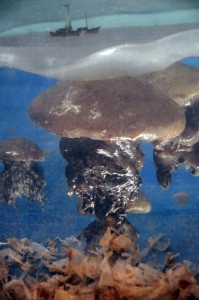 Bonito flakes signify the discarded scraps and decaying detritus fragments that Schwitters used, their fragile form representing the vulnerability and transience of all that constitutes the world of the artist including creative outputs. Schwitters’ unique handicraft is also echoed in the image of the jellyfish that form one of the old handcrafted displays of the Shanghai Natural History Museum.