These projects explore affordable housing and key environmental objectives of small scale, material re-use, possible fireproofing through the use of a solid steel structure, and the desire to build a dwelling from an ‘additive’ gleaner sculptural approach. The name of the work relates to the Sixth Patriarch Hui Neng’s who said “The body is an inn” and video documentation of the work includes a visit to his temple in Southern China as part of an Australia-China residency in 2005.

Temporary refuge 3 involves a precedent-setting 3-stage ‘deemed dwellable’ owner-builder project in Katoomba that was approved in 2021. It demonstrates how and where we can apply pressure to move cogs that are typically defaulted to only work for big developers or the private sector. With this type of approval process assistance includes: insurance eligibility for fires/floods/whatever comes next, scaling building to different lifecycle needs/budgets and unforeseen life changes such as family separation/disability, being able to move in early as part of a build, being able to respond more flexibly to ongoing covid and deteriorating international trade relation impacts regarding access to tradespeople and materials, support for co-housing initiative initial outlay costs and eco-designing involving gleaner/sculptor approaches. Ultimately, if adopted widely it can help shift voters to explore issues beyond mortgage protection. 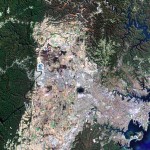 Given the many examples of architectural obesity in Sydney it is unclear if this is genuine market preference or simply developers’ risk-aversion that causes them to stick blindly with the proven sellers. Therefore, I thought alternative ways of designing and creating houses needs to be encouraged, especially given the issues relating to housing affordability, environmentalism and the way our poorly planned cities are dying from the outside in.

Mortgage stress statistics show that salaries for those inside the western Sydney region have not increased enough to keep up with housing cost increases. A research paper issued by the Urban Research Program at Griffith University entitled Oil Vulnerability in the Australian City (Jago Dodson and Neil Sipe) 2005, highlights the fact that localities situated in the middle and outer suburbs of western Sydney are the most vulnerable to the socio-economic impact of oil price rises. In further research, based on the 2006 Census findings, the same authors noted the spread of the crisis creeping inwards from the urban fringes. They noted “a highly regressive pattern in which the impacts of higher fuel costs and increased interest rates fall on those with least capacity to absorb these impacts. The deficits in urban infrastructure and services meant the more vulnerable households had less ability to adapt to higher fuel costs by taking public transport.”

A related issue is the rising problem of homelessness in Western Sydney. I wrote a short advocacy and lobbying report to support the 2011 research of Bankstown Creating Links Cooperative to highlight the alarming levels of homelessness within the government area that would not be alleviated by the housing planned in the NSW Government Metropolitan Strategy. DOWNLOAD article

This work was partly inspired by the life work of John Archer, co-founder of the Owner Builder magazine, who encouraged different approaches to the project. John’s work was featured in a solo show held at Loose Projects in Sydney 2006, which incorporated his publications on vernacular architecture and environmentalism, his own artworks, and a documentary made of his housebuilding work in the 1980s with Indigenous people in remote communities recovering from petrol-sniffing.